I've met many new friends in the fight against Common Core.  One such friend is Marla Baldwin, teacher from Calcasieu Parish.

I’m getting really sick of the people who are acting like the "sky is falling" because Gov. Jindal used his executive power to start the process of exiting LA from CC/PARCC. Here's the comment that set me off tonight. "Oh great, Gov. Jindal wants Louisiana to stay at the bottom of the country in test score ranking."

First of all, governor Jindal has finally listened to the people of Louisiana rather than the corporations who stand to make money off of CC/PARCC or have already received $ from the Bill and Melinda Gates Foundation for their support.

Secondly, most people do not understand or have not thought about what the ranking of states by test scores actually mean. Here's a reminder about how the ranking of states really works: 50 states get ranked. That means that one will be #1 and one will be #50. Imagine having 50 Valedictorians in a graduating class. While all 50 valedictorians are wonderful, each could be ranked from #1 to #50. Is being valedictorian #50, really that big of a deal? If you rank, that's what you get, a top and a bottom, and lots of in-between.

Now let's think about the ranking of states. Let's say Massachusetts is #1 with a score of 87. Louisiana is NOT #50, but let's say we are with a score of 77. That's only a 10 point difference. It is NOT what most people think that #1 is 100 and #50 is a big fat 0. This is part of the manufactured crisis that reformers put out in the media, [emphasis added] because they know 1) people will believe the media at face value without really knowing what's going on & 2) the best way to get people to accept radical change like CC is to make them believe that the change is necessary.

AND if all states were to improve from CC (which is highly unlikely), wouldn't all states improve? Hence, #1 will still be #1 but maybe with a score of 89. #50 might improve to a whopping 79. What makes anybody think that Louisiana will suddenly jettison to the top of the country in test scores based on the implementation of CC?

People need to stop being so gullible and start really thinking about what's really going on. It's all about the $$$$$$$. It was NEVER about our children. Finally, no one even knows how valid these tests are and no one mentions the other factors that contribute to student achievement, such as poverty, crime, unemployment rates, parents imprisoned which vary from state to state.

So, there you have it. Louisiana school rankings might not be as bad as the media and education reformers would have you believe.  Who'da' thunk?

Posted by That's Just Stupid at 8:08 AM No comments:

Just How Much Does Big Business Care About Your Child? 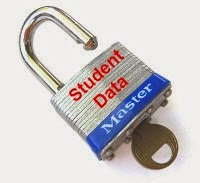 The Common Core testing company, PARCC, knew it had major data security flaws in its computer-based field tests, administered by Pearson Testing this past spring to over 1 million students in 14 states, but they went ahead with the field test anyway.

Twelve days  before the PARCC field tests were due to begin, an email was sent to state leads that warned of both internal and external  data security flaws in the PARCC computerized tests that posed a security risk to student data.

Did you catch that?  PARCC and Pearson KNEW that there were flaws that posed a security risk to student data but that didn't stop them from administering the field tests!